THE RETURN OF THE VIKINGS

By roses-forever.dk On 19th October 2015 · Add Comment · In Uncategorised

After having travelled across large parts of Europe for some 300 years, the Vikings even crossed the ocean to North America, now 1000 years ago and long before Columbus officially discovered the continent. In looks, the Scandinavians of today are much the same, but today have a reputation of peace-loving and very social nations, whereas their ancestors plundered the places they visited, killing the men and taking the women.

The Vikings are coming again! Like the distant ancestors strong and fearless and appealing on the outside, but like the present day northern ‘tribes’ with warm hearts. The Viking Roses® are the creations of the Danish breeder Rosa Eskelund, finding herself “a little crazy” with Sicilian temperament and a natural eye for beauty and genetics. Rosa is the only female breeder in the male-dominated rose world.

Unlike all her male colleagues, Rosa has stubbornly developed her varieties from a different genetic background, carrying in them the mysteries of centuries. With the introduction of her Vikings, Rosa will gradually reveal her secrets.

Traditional in the Viking world, Rosa’s creations are untraditional in the modern rose world in color, shape, vaselife and disease resistance. From breeding and first selection in Denmark, the new codes are then selected first outdoor and then in the greenhouse in the Netherlands and then sent to selected growers in different production areas.

Untraditional is also the marketing in which Rosa and her husband Harley have teamed up with John Pouw, whose innovative marketing approach was written about in a leading Dutch branding magazine. No fancy showcases, but focus on the consumer and those supplying the consumer. Branding and exclusivity are key terms in this.

Therefore in the forthcoming trade shows in the Netherlands in the first week of November Viking Roses® can be found at Waterdrinker Cultra (FloraHolland Aalsmeer-Legmeerdijk 313-1432 KC Aalsmeer) from Sunday 1 November to Thursday 5 November).

Meet Rosa, Harley and John there. Watch out! 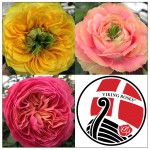 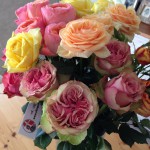