By roses-forever.dk On 31st October 2016 · Add Comment · In Uncategorised

The late Danish horticulturist Svend Jensen invented the miniature potrose in the 1980s. He developed a method to cultivate low growing garden roses inside a greenhouse into 10 and 12 cm potplants. Rosa Eskelund had her first sales job at Danrose, Svend’s company. Harley was the grower and technical expert there. They fell in love with the product and each other. Consequently, their children grew up in the greenhouse. Rosa would be pushing her pram with Camilla around the roses.

The late Dutch entrepreneur Anton Pouw started set up his own flower production when he was 18. He had the best white carnations of the country, but was always looking for new products. One day, returning from France he ripped out his carnations and planted a pink rose that he picked up with a French breeder: Sonia®. Anton had an eye for varieties. He personally selected Madelon®, Vivaldi® and First Red®. In the early 1990s, Anton looked for big headed varieties when the whole industry wanted thin pointed heads for packing rate. Anton’s godson John was present when Anton picked out First Red® and followed his uncle and mentor after that to direct different breeding houses.

Svend and Anton, geniuses in breeding and selection, meet in Rosa Loves Me®, a series of long-lasting, disease resistant,garden shaped cutroses, often fragrant and in a variety of colors, developed by Rosa and selected by John. 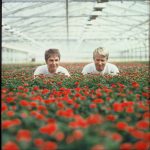